Susanna and the Elders, Restored (Left)

Susanna and the Elders, Restored with X-ray (Right)

Oooh my gosh this is rad. This is so rad.

For those who don’t know about this painting, the artist was the Baroque artist Artemisia Gentileschi.

Gentileschi was a female painter in a time when it was very largely unheard of for a woman to be an artist. She managed to get the opportunity for training and eventual employment because her father, Orazio, was already a well established master painter who was very adamant that she get artistic training. He apparently saw a high degree of skill in some artwork she did as a hobby in childhood. He was very supportive of her and encouraged her to resist the “traditional attitude and psychological submission to brainwashing and the jealousy of her obvious talents.”

Gentileschi became extremely well known in her time for painting female figures from the Bible and their suffering. For example, the one seen above depicts the story from the Book of Daniel. Susanna is bathing in her garden when two elders began to spy on her in the nude. As she finishes they stop her and tell her that they will tell everyone that they saw her have an affair with a young man (she’s married so this is an offense punishable by death) unless she has sex with them. She refuses, they tell their tale, and she is going to be put to death when the protagonist of the book (Daniel) stops them.

So that painting above? That was her first major painting. She was SEVENTEEN-YEARS-OLD. For context, here is a painting of the same story by Alessandro Allori made just four years earlier in 1606: 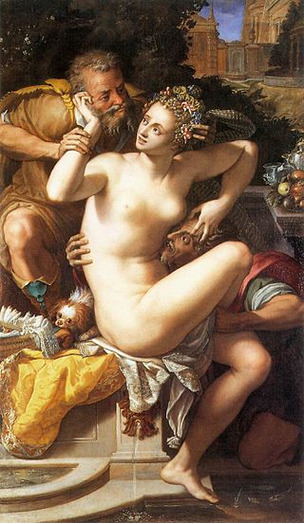 Wowwwww. That does not look like a woman being threatened with a choice between death or rape. So imagine 17 year old Artemisia trying to approach painting the scene of a woman being assaulted. And she paints what is seen in the x-ray above. A woman in horrifying, grotesque anguish with what appears to be a knife poised in her clenched hand. Damn that shit is real. Who wants to guess that she was advised by, perhaps her father or others, to tone it down. Women can’t look that grotesque. Sexual assault can’t be depicted as that horrifying. And women definitely can’t be seen as having the potential to fight back. Certainly not in artwork. Women need to be soft. They need to wilt from their captors but still look pretty and be a damsel in distress. So she changed it.

What’s interesting to note is that she eventually painted and stuck with some of her own, less traditional depictions of women. However, that is more interesting with some context.

(Warning for reference to rape, torture, and images of paintings which show violence and blood.)

So, Gentileschi’s story continues in the very next year, 1611, when her father hires Agostino Tassi, an artist, to privately tutor her. It was in this time when Tassi raped her. He then proceeded to promise that he would marry her. He pointed out that if it got out that she had lost her virginity to a man she wasn’t going to marry then it would ruin her. Using this, he emotionally manipulated her into continuing a sexual relationship with him. However, he then proceeded to marry someone else. Horrified at this turn of events she went to her father. Orazio was having none of this shit and took Tassi to court. At that time, rape wasn’t technically an offense to warrant a trial, but the fact that he had taken her virginity (and therefore technically “damaged Orazio’s property”. ugh.) meant that the trial went along. It lasted for 7 months. During this time, to prove the truth of her words, Artemisia was given invasive gynecological examinations and was even questioned while being subjected to torture via thumb screws. It was also discovered during the trial that Tassi was planning to kill his current wife, have an affair with her sister, and steal a number of Orazio’s paintings. Tassi was found guilty and was given a prison sentence of…. ONE. YEAR……. Which he never even served because the verdict was annulled.

During this time and a bit after (1611-1612), Artemisia painted her most famous work of Judith Slaying Holofernes. This bible story involved Holofernes, an Assyrian general, leading troops to invade and destroy Bethulia, the home of Judith. Judith decides to deal with this issue by coming to him, flirting with him to get his guard down, and then plying him with food and lots of wine. When he passed out, Judith and her handmaiden took his sword and cut his head off. Issue averted. The subject was a very popular one for art at the time. Here is a version of the scene painted in 1598-99 by Carivaggio, whom was a great stylistic influence on Artemisia: 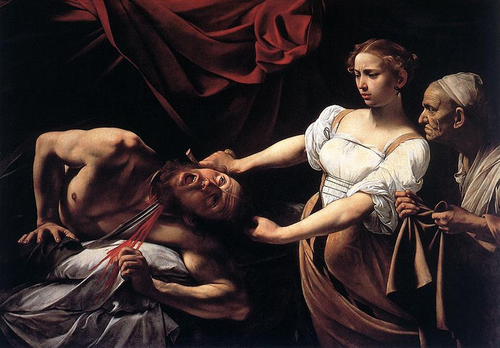 This depiction is a pretty good example of how this scene was typically depicted. Artists usually went out of their way to show Judith committing the act (or having committed it) while trying to detach her from the actual violence of it. In this way, they could avoid her losing the morality of her character and also avoid showing a woman committing such aggression. So here we see a young, rather delicate looking Judith in a pure white dress. She is daintily holding down this massive man and looks rather disgusted and upset at having to do this. Now, here is Artemisia’s: 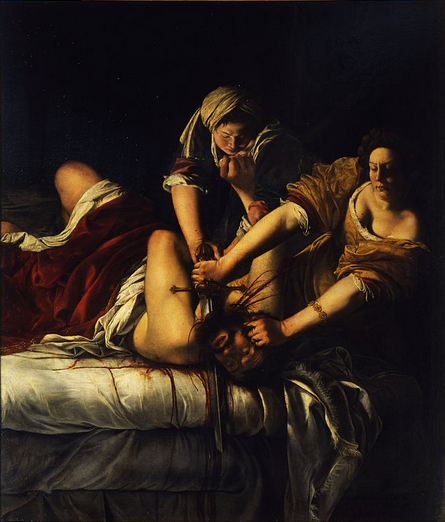 Damn. Thats a whole different scene. Here Holofernes looks less like he’s simply surprised by the goings ons and more like a man choking on his own blood and struggling fruitlessly against his captors. The blood here is less of a bright red than in Carrivaggio’s but is somehow more sickening. It feels more real, and gushes in a much less stylized way than Carrivaggio’s. Not to mention, Judith here is far from removed from the violence. She is putting her physical weight into this act. Her hands (much stronger looking than most depictions of women’s hands in early artwork) are working hard. Her face, as well, is completely different. She doesn’t look upset, necessarily, but more determined.

It’s also worth note that the handmaiden is now involved in the action. It’s worth note because, during her rape trial, Artemisia stated that she had cried for help during the initial rape. Specifically she had called for Tassi’s female tenant in the building, Tuzia. Tuzia not only ignored her cries for help, but she also denied the whole happening. Tuzia had been a friend of Artemisia’s and in fact was one of her only female friends. Artemisia felt extremely betrayed, but rather than turning her against her own gender, this event instilled in her the deep importance of female relationships and solidarity among women. This can be seen in some of her artwork, and I believe in the one above, as well, with the inclusion of the handmaiden in the act.

So, I just added a million words worth of information dump on a post when no one asked me, but there we go. I could talk for ages about Artemisia as a person and her depictions of women (even beyond what I wrote above. Don’t get me started on her depictions of female nudes in comparison to how male artists painted nude women at the time.)

To sum up: Artemisia Gentileschi is rad as hell. This x-ray is also rad as hell and makes her even radder.

I’m reblogging this again to add something that I also think is important to know about Artemisia Gentileschi.
Back in her time and through even to TODAY, there are people who argue that her artworks were greatly aided by her father…. As in he either helped her paint them or just straight up painted them himself. Hell, there are a number of works only recently (past several years or so) that have been officially attributed to Artemisia because people originally saw the signature with “Gentileschi” in it and automatically attributed it to Orazio.
So, not only was Artemisia Gentileschi an amazing artist and amazing historical figure, but I don’t want it to be ignored that there are people over 400 years later who still won’t give her the credit she deserves, just because she’s a woman and obviously women can’t paint like she did.

Okay tumblr, I’m coming temporarily out of retirement for this.